The Rockwell South at Carmelray is located in Brgy. Canlubang, Calamba City, Laguna.

Canlubang is now a major industrial zone located on the outskirts of Calamba City in Laguna. This barangay was once a hacienda during the Spanish colonial period and stretches as far as Cabuyao and Sta. Rosa, Laguna where the Nuvali Evoliving development of Ayala Land is situated.

Moreover, Canlubang currently hosts major industrial zones that are a magnet for more residential and commercial hubs to thrive in the area. However, the area remains as pristine and quiet as ever even though several establishments and residential developments have been rising because of the unique landscape and natural setting of the place.

If you haven’t been to Calamba, you will find the place where Rockwell South is situated to be an awesome contrast to Metro Manila’s asphalt jungle. The Rockwell’s horizontal development covers a vast green enclave that is being developed without altering the beauty of the place. The luxurious but affordable housing community is also a neighbor to other industrial zones, such as the Carmelray Industrial Park 2. Some of the companies that are operating here are the Advantek, Inc., Frontken Philippines, Inc., HKT Philippines, PSI Technology Corp., Nitto-Nisten Philippines, and Nanos Tech Electronics Corp., among others.

The presence of several residential townships within Canlubang is an indication that the area is safe and secured for families who are seeking the best place in the world for their residence or a vacation retreat away from the buzz and fuzz of the metropolis. The other industrial parks that are situated close to Rockwell South at Carmelray Canlubang, aside from the Carmelray Industrial Estate 1 at Carmeltown, include the Silangan Industrial Park, Light Industry and Science Park I, the Carmelray International Business Park, and the NYK-TDG IT Park. These workplaces are a great source of long-lasting and high-earning employment or a good place to engage in business.

But did you know that there are a dozen more of these industrial parks scattered around Calamba City alone? Some of the biggest of these industrial parks are the Calamba Premier Industrial Park, Allegis IT Park, and the Light Industry & Science Park II. With these industrial zones just a spit away from your new home, you are sure to have more opportunities for employment and business. But that doesn’t end all your benefits once you settle at the Rockwell South at Carmelray Canlubang. Calamba City offers more opportunities for better education for your kids as there are several top-notch private and public schools surrounding the awesome community. Furthermore, the City of Calamba is the richest city in the CALABARZON region that’s why it attracts more visitors for its several attractions and more industrial sites because of its favorable business climate and its proximity to Metro Manila. Some of the schools, medical institutions, commercial complexes, and other establishments have established their presence in the city a long time ago and are thriving successfully. 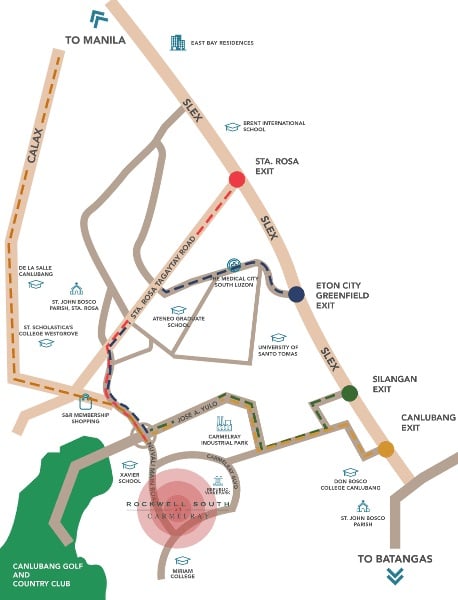